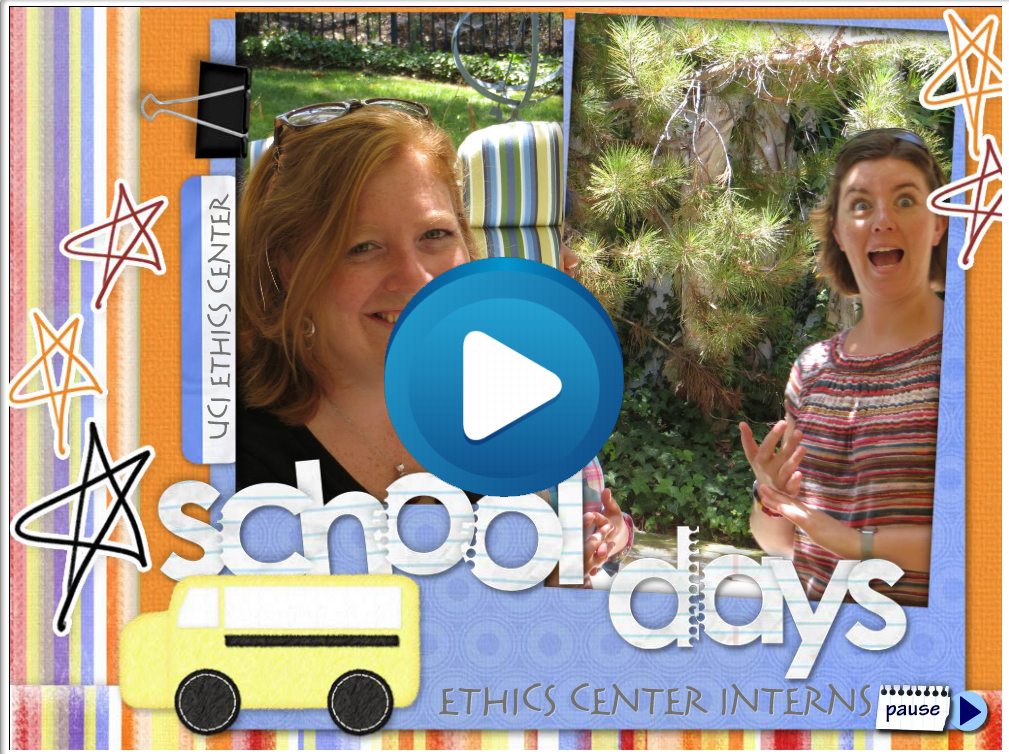 SUMMER PROGRAM: Each summer the UCI Ethics Center selects a few promising students -- from UCI and nearby high schools, along with local college students home for the summer—who are interested in working closely in a mentorship program with a university faculty member or a graduate student mentor. In past years, we have tended to accept 3-4 high school interns, 4-5 students from other colleges and universities, and 5-10 UCI undergrad and graduate students. Past interns from other colleges have come from Yale, U of Chicago, Simon Fraser University, and Notre Dame inter alia. Sometimes students come to the intern program with a project on which they wish to work and sometimes they choose a topic after consultation with the Director of the Ethics Center, who then can place the student with the best faculty member for mentoring. The only requirement for a research topic is that the project both increase student sensitivity to ethical issues and allow students to become engaged in scholarly research.

ILLUSTRATIONS:  The following illustrate the types of projects in which students have been involved

These illustrations suggest how extensively we encourage students to become actively involved in research and how -- if they do this well -- we reward them by acknowledging their assistance publicly via shared authorship of some kind.  Interns also receive a letter of recommendation to go in their file, to be used for college, grad and professional school applications, or for jobs. The best interns  also are designated Francisco Ayala Scholars, to honor the work of Francisco Ayala, one of the founding members of the Ethics Center, distinguished scholar and recipient of many prestigious awards, ranging from the Templeton Prize to the Presidential Medal of Honor.

Faculty members willing to mentor students can volunteer to serve as a mentor by emailing Marilu Daum at TBA your contact information by May 1, 2020.

UCI grad students who wish to apply should send Marilu Daum at TBA by May 1, 2020 that following: (1) if you are willing to mentor a college or high school student; (2) if you have a project of your own on which you wish to work and, if so, describe it in one paragraph; and (3) if you do not have an existing project, if you are willing to work on a joint project with the Director and other interns.

For UCI graduate students who are interested in applying, we offer modest stipends.  More information will be provided on the first day of class.

Acceptances for the 2020 Summer Internship Program are evaluated on an on-going basis until all slots are filled. We will try to notify applicants as soon as decisions are made but we definitely will send out decisions by mid June, 2020.

Due to the current situation, the 2020 CEM Summer Internship program will be conducted in virtual reality, via Skype, Zoom or email from Monday, June 29, 2020 to Friday, July 24, 2020.

We regret not being able to work with interns more closely but our first concern must be the well-being of all.

Note:  Due to the unusual period in which we are living -- because of COVID 19 -- the application due date has been extended until June 1, 2020.

Applications from outside California and foreign applications will also be considered until June 1, 2020.

Please send your Resume and Interest Letter in PDF format for the reviewing and acceptance process by June 1, 2020 to TBA atTBA.

All instruction during the 2020 Summer Internship  will be online and applications from students outside California will be considered.

Because of the death of George Floyd and the ensuing political events, two additional modules were added.

Module 6: It about American equality and asks if it is fact or fiction. Discussion centers on the politics of social categories and examines American immigration policy, especially toward Latinx groups

Module 7: It discusses the proper response to morally reprehensible political regimes and acts.

Email your top two preferences to TBA at TBA.